What qualifies as a small dependency?

Small dependencies are libraries and packages that can be replaced by less than 200 lines of code at the moment when it gets introduced in a project. The small dependency that I most often see are testing frameworks in C++ projects so I will go ahead and use them as example of widespread "bad practice"[1].

Why "simple" won the race when working on SStorage?

SStorage is made of a bunch of different parts. We try to test those parts and verify our test coverage regularly.

For that we use a minimalist Makefile and a minimalist test framework (both combined are 124 lines of code), and the main reason for that is: we don't need more, and if we did, adding more would be extremely easy.

Let's compare that with Catch2: Catch2 is rather featurefull, actually, it has so many features we will almost never use them all. With 16k lines of code, it is quite a large codebase. Here is a small comparison of code size of frameworks:

Now what do I mean by accomodating new features? I mean "Is it obvious how to add a feature to the framework when you need it and do not have knowledge of the inner workings or the framework?", and my experience has it that learning on the internals of something larger than 5'000 lines of code is complex, takes time, takes effort, and is generally less obvious than reading 140 lines of code and understanding them. This means that by having a very small framework, one can learn all the subtleties of the framework with a single glance (or a few more depending on your screen size).

This is why our distributed database and cloud storage doesn't use one of the front-running frameworks for its testing but a simple and primitive one: easy to check, easy to modify.

Yet another "small" dependency 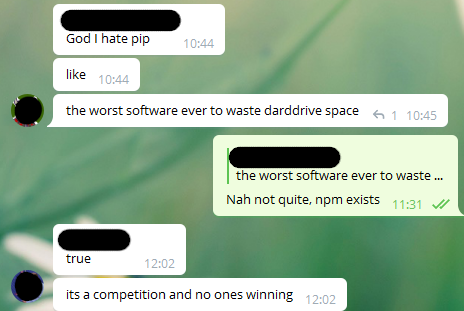 Dependencies do not come alone. Do you remember when I listed Boost.Test as being around 10k lines of code? Well, it just happens that Boost.Test has dependencies:

It actually has about 290'000 lines of code worth of dependencies[2]. That is quite a lot of code. Lots of code under a lot of scrutiny, and maybe lots of code you don't feel as you already use most of Boost in your project, but I would not call that insignificant.

I find it unacceptable for my software to sit on this many dependencies for features that are mostly unused. Writing distributed software is complicated enough, worrying about computer security is tiresome enough, but baby-sitting several million lines of code worth of dependencies for security reasons is too much.

What is a "not small" dependency?

Acceptable dependencies are hard to replace. Replacing an entire PostgreSQL driver is a complex task. Rewriting SQLite3 is not realistic (and testing it as much as the real deal? impossible).

Those are unavoidable dependencies.

They are not realistic to avoid entirely.

The only dependencies currently in SStorage are internal dependencies. Those dependencies handle both network protocol writing tools, tools that may not be provided by an operating system or that can be useful in the absence of one. They also provide code that we integrate from other sources like cryptographic primitives.

The reason for this internal dependency is code reuse within the project as the software is split into several parts.

I invite you to check the information at https://nekoit.xyz/, join us on Discord or Telegram, or follow me on Mastodon [email protected] to receive notifications of my followup posts.

If you like my content and want more, please donate. If everyone that finds my content useful paid $1 every week, I would be able to produce content for 1 week a month without relying on other sources of income for that week.

Data replication is a corner stone of distributed systems: since the very beginnings of cloud computing, being able to assert that pieces of data would not be lost in an incident always was